Honoring Our Aging Veterans on November 11, 2012: Understanding the History of Veterans Day In Turnersville, NJ

Celebrating the Close of the War to End all Wars

This holiday has a noble and triumphant history which stems from the conclusion of World War I. 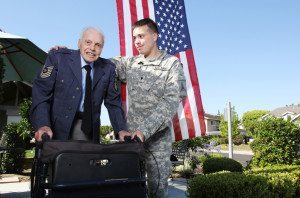 The day that is set aside each year to celebrate peace, and to remember those who have helped to create and preserve it, is November 11th. The date is special and greatly significant. In the year of 1918, the German Armistice was signed on the 11th day of the 11th month at precisely the 11th hour. This signified the close of the “war to end all wars,” and represented a new era of peace. Many aging veterans will remember their parents and grandparents speaking of this day with solemnity and appreciation.

Originally, November 11th”s celebration was called Armistice Day, and was installed by President Woodrow Wilson in 1919.

There are corresponding holidays in other countries throughout the world as well, such as Remembrance Day and Armistice Day. Although the United States has seen many changes over the course of decades for what was formerly called Armistice Day, including a change of date, it is now back to its original time but is officially known as Veterans Day.

Many communities throughout the country celebrate this day with thanksgiving. It is not uncommon at all to see many small towns lined with American flags, or to see parades held in honor of those who have served us so nobly throughout the years. Many take special consideration for the aging veterans throughout the country, and moments of silence at precisely 11 in the morning are common.

However, there is no service more heartrending than the one held at the Tomb of the Unknown Soldier.

This grave does indeed contain an unknown American soldier at Arlington National Cemetery. It is guarded at all times by servicemen and women of this great nation. And on November 11th, there is a special ceremony held at 11am which includes a color guard of four; one person to represent each branch of service, and the sounding of the taps. The President of the United States, or his personal representative, places a wreath on the grave. There is also a Parade of Flags at the Memorial Amphitheater.

For all of your senior care needs in Turnersville, NJ and the surrounding areas call and talk to us at Home to Stay Healthcare Solutions (856) 720-0081