What to Do When Your Father Resists Elderly Care in Turnersville, NJ 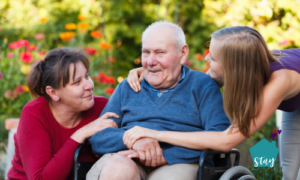 Peter had been noticing that his father was having a little bit more trouble taking care of himself at home. In the beginning, they were just small signs but over time they begin to build. At some point, Peter’s wife mentioned that it may be time to consider nursing home or another type of assisted living facility for his father.

Peter knew that wasn’t going to happen because his father was a proud man and Peter refused to even consider the possibility of forcing him out of his own home, a house that he actually built with his bare hands. At the same time, Peter also understood that something had to be done. When it came to elderly care, though, Peter didn’t know much about it and if he’d mentioned the idea with his father he was met with a great deal of resistance.

The first thing Peter realized that he had to do was to get as much information about the various options that were available. He learned about elderly care providers and the services that they could provide to his father.

Still, he had to figure out how to bring the topic up with his father. Over time he realized that the best approach was a straightforward and honest one, but one that is coupled with compassion and understanding. He had to put himself in his father’s situation. He could only imagine what the idea of losing independence could mean to a man like his father. So he sat down with him one day and brought up a few instances in recent memory that caused him to have some concern about his father’s well-being and safety at home.

At first his father was telling him that he was fine, and he had expected this. But as they talked, Peter heard his father beginning to talk more about how difficult things had gotten for him and how at times he was actually a little frightened of being alone in this big house. His father did not want to move so they discussed the prospect of having an elderly care provider come in for an hour or two a day just to make sure that he had everything he needed.

When you have to talk to your father about elderly care, the best approach is one that is compassionate and done in small increments. Make mention of it and that if there is resistance let it go for the time being. Of course, if there is major health risks involved, the discussion may have to move forward. You can contact any number of elderly care providers for assistance in learning how to broach this sensitive yet important topic.

For all of your elderly care needs in Turnersville, NJ and the surrounding areas call and talk to us at Home to Stay Healthcare Solutions (856) 321-1500.