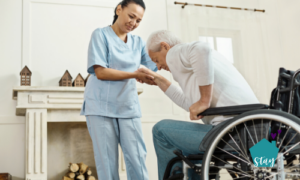 Samantha was worried about her mother and father. A few months ago, her mother suffered a massive stroke that essentially left her bedridden. The doctors were elusive about whether she’s be able to get around on her own again someday, but at 76 years old, Samantha knew the reality of what awaited. Her father did too, but he was also 81 and had broken his hip two years earlier.

Money was tight and she couldn’t afford to help out much financially. She certainly couldn’t afford assisted living and her father was reluctant to give up the last comforts that they had, so they decided to stay where they were. The problem for Samantha was that she lived more than five hours away; she wouldn’t be able to provide any real help, but she promised her father that she was there whenever he needed her.

Samantha called to check in every day, morning and night. She could hear the fatigued beginning to set in on her father and worried about his health. She drove out to visit with them every other weekend, causing problems within her own family.

This went on for more than three months before she realized that it couldn’t continue. Her father needed help, he needed to take care of himself and he couldn’t even help his wife get out of bed, let alone try to move around. That’s when Samantha realized that elderly care of some form was necessary.

Many people try to avoid the prospect of mentioning assisted living or nursing home care to loved ones because of the idea that they will lose some measure of independence that they’ve enjoyed most of their life. However, Samantha’s parents lived in a rural community and most of their friends had passed away or moved to be closer to family years ago. Her parents simply wanted to stay where they were.

Samantha began calling around to various in home care agencies and found that elderly care providers were more affordable than she previously thought. Her parents had Medicare insurance, which could help cover some of the expenses as well. Her father didn’t need around the clock care; he only needed help for a few hours a day and that was what he received with his new elder care provider.

Samantha was able to focus on her own responsibilities and her mother was able to get out of bed and start moving around again in time. She was grateful to have found in home care and her father was able to take care of himself once again as well. Samantha discovered the hard way that long distance elderly care doesn’t work well and can place too much pressure on everyone else in the process.

For all of your elderly care needs in Cherry Hill NJ and the surrounding areas call and talk to us at Home to Stay Healthcare Solutions (856) 321-1500.